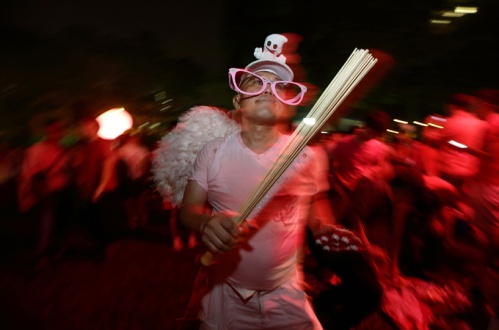 Singapore – Homosexuality in this Southeast Asian city-state has been illegal here for more than a century, dating back to law under colonial British rule. In a country that still lashes convicted criminals with a cane, sexual contact between men is punishable by up to two years in jail.

But in recent years the country has become ambivalent about enforcing its homosexuality laws, and as a result, gay culture is slowly emerging here in ways that seemed unimaginable just a decade ago.

“Pink Dot Sg” – a play on words on Singapore’s nickname, Little Red Dot – is an open-air event where thousands dress in pink and gather to form a giant dot in support of lesbian, gay, bisexual and transgender (LGBT) causes. The festival marks its fifth year on June 29, and the organisers say they expect turnout to be enormous.

Major corporations have begun to sponsor the event, including Google, JP Morgan, and Barclays.

“The growing number of companies who are coming out and supporting social movements like Pink Dot is humbling,” says Paerin Choa, spokesperson for Pink Dot Sg. “Increasingly, corporate entities are recognising the importance of values like inclusiveness and diversity, not just in the creation of a good working environment for employees, but also as a gesture of goodwill to clients and customers.” Continue reading …