Young and old unite to celebrate 50th anniversary of the Tokyo 1964 Olympics, and look to 2020 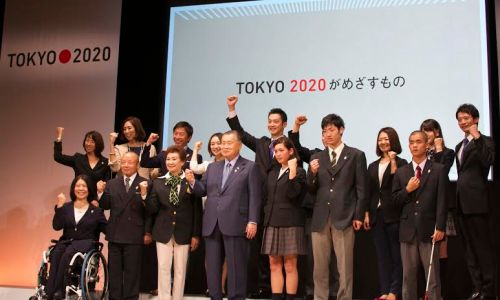 For today’s 50th anniversary of the start of the 1964 summer Olympics in Tokyo, Olympians from Japan’s past and possible contenders for future games came together today to share stories of glory days and hopes for Tokyo’s 2020 summer games.

Scores of Japanese journalists, photographers and videographers turned out to document past and future Japanese athletes discussing the importance of the games before a packed auditorium at the Tokyo Chamber of Commerce and Industry building.

Kiyoko Ono, 78, a gymnast who won a bronze medal in the ’64 Olympics, said she balanced the demands of motherhood and those of being an Olympic athlete by focusing on her goals and never giving up.

Yoshiyuki Miyake, 69, a weightlifter who won a bronze medal in the 1968 Summer Olympics, said a combination of hope, dreams, and practice is the key to success.

Motoko Obayashi, 47, who participated in Olympic competitions in Seoul, Barcelona, and Atlanta, said she was teased from the 6th grade for her unusual height, but put that to good use when she became a star volleyball player.

Swimmer Ryosuke Irie, 24, who won medals at the 2012 summer Olympics in London, said future generations will be inspired by past Olympic achievements.

The Olympics have been a huge story in Japan ever since Tokyo’s selection last fall as 2020 host. Journalist Kumiko Suzuki, who was covering today’s event, remembers the day well: “Even the media people were excited by the announcement, they almost forgot to take photos.”

The writer and photographer for Tokyo Frontline added: “Older people said to me they want to take care of themselves so they live long enough to see the Olympics.”

(Thanks to Taku Yuasa for translation.)