Eating around the Indian subcontinent — in Singapore

The following is a longer version of a column I did for Mainichi Weekly on Singapore’s Little India. For this piece I interviewed Chef Devagi Sanmugam, the Spice Queen of Singapore, and I am greatly indebted to her for allowing me to access her vast store of knowledge as well as the food recommendations for specific restaurants and favorite dishes that she shares below. 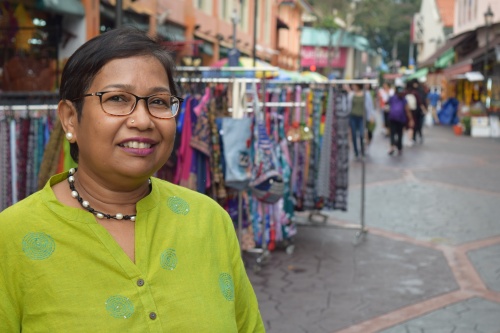 You can eat your way through the whole Indian subcontinent — just by walking around one neighborhood in Singapore.

Singapore’s Little India is many different things to many people.

It is a shopping paradise, for everything from hard to find Indian spices to colorful flower garlands, beautiful sarees and men’s shirts, colourful bangles, even henna designs.

It is a gathering place for South Asians living in Singapore — including the foreign workers from all over the region who spend their one day a week off (Sundays) by meeting and socializing in Little India.

It is a cultural center, where you can see performances, learn about Indian culture, or just walk about taking in the sounds of the of the latest Bollywood songs or classical Indian music.

And it is a food paradise, with restaurants that specialize in the various regions found in and around the Indian subcontinent.

As a resident of Singapore, I quickly learned that restaurants in Little India differ vastly, depending on regional cuisines. You don’t go out for Indian food — you go out for different kinds of regional foods from around the Indian subcontinent. I started out knowing little, other than to equate South Indian cuisine with spicy with lots of rice-based dishes, and North Indian not so spicy with lots of wheat based breads.

So I turned for expert opinion to Chef Devagi Sanmugam http://spice-queen.com , the award-winning author of 22 cookbooks, to teach me some of the differences. Chef Devagi — called the Spice Queen of Singapore — has family roots going back to Tamil Nadu, on the southeast coast of Indian Peninsula, and she is a self-taught cook.

So let’s looks at the regional foods available in Singapore’s Little India.

Kerala. At the southwestern tip of India, tropical and coastal with wide beaches and shady palm trees, Kerala’s popular foods include a lot of coconut, chilis and peppers, and lots of seafood such as crabs and mussels, as well as both beef and pork, since the area includes both Christians and Muslims. Because banana trees abound, dishes are frequently wrapped in banana leaves. Appams, a type of pancake made fermented rice batter and coconut milk, are common to Kerala and Sri Lanka.

Sri Lankan. Similar to Kerala but can be milder, uses peppers instead of chilis, and green raw vegetables.

Tamilian. Mostly vegetarian and spicy, and unlike Kerala will not use much coconut. Spicy hot biryani is popular. (Each region has its own variation of bryani.)

(While we’re on the subject of vegetarian restaurants, another popular one is Gokul Vegetarian, which uses mock meat to appear like meats such as chicken or mutton. “I would never eat food like that,” Chef Devagi says. Still, there are recommendations: Fish Curry, Vegetarian briyani, Mysore Mutton)

Andhra Pradesh. Food from this coastal state is spicy, hot, and sour, with a lot of mangoes and an edible leafy plant called gongura.

Bengali, Bangladeshi. An East Indian cuisine, a lot of milk-based foods and seafood is popular, not as spicy, and yellow or black mustard are often the heat-giving element.

Indo-fusion, or Tangra Chinese Cuisine. A mix of Chinese and Indian cuisine — in particular, Chinese style cooking modified to suit Indian tastes, such as Chinese Hakka noodles with Indian spices, or Manchurian cauliflower. (Tangra is a neighborhood in Kolkata with a Hakka Chinese community, hence the emergence of Hakka style Chinese food.)

Indian Muslim. Muslims from Western Asia and India formed Mughlai cuisine. Many dishes are rich and meat based, for example biryanis, kebabs and other curries usually eaten with flat breads or basmati rice. Curries are heavy with ground almonds and pistachios.

Nepalese. A mix of Indian foods, nothing much particular to its region. Rice, dal, okra (lady’s fingers), naan, tandoori chicken. “It’s the name Nepalese that sells, it’s not the food,” Chef Devagi says.

Tibetan. Steamed and Chinese-like cooking, more like Nepali and other North Indian cuisine.

Punjabi. Wheat and basmati rice is staple in Punjab, hence chapatis, cumin, rice, etc. Liberal use of ghee, paneer and yogurt and lots of pickles. Dishes are not so spicy hot but very rich tasting. Best tandoori dishes are from Punjab, and butter chicken. Famous for carrot halwa (an Indian sweet made by boiling grated carrot, milk, cream, ghee and sugar)