A second home for foreign correspondents in Japan since 1945

One of my favorite things about the Foreign Correspondents’ Club of Japan in Tokyo is a wall in the library/workroom filled with books by current and former members. You’re in good company when you get to spend time perusing those shelves.

I didn’t know, for example, that the prolific James Michener wrote the novel that became the basis for the 1957 movie Sayonara with Marlon Brando, which took on the post-WWII issue of racial prejudice among American military members stationed in Japan.

I also had the pleasure of meeting another famed FCCJ author, Robert Whiting, whose classic You Gotta Have Wa uses baseball to explain cultural differences between the US and Japan. END_OF_DOCUMENT_TOKEN_TO_BE_REPLACED

Down and out in Tokyo

Tokyo government claims its homeless population has hit a record low, but analysts – and the homeless – beg to differ.

Tokyo, Japan – Minoru Ebata’s living quarters stand out in the upscale Tokyo neighbourhood of Shinjuku. The 64-year-old sleeps on a makeshift bed on the sidewalk off busy Koen Dori (Park Street), a pedestrian overpass somewhat protecting him and a few piles of his possessions from a cool autumn drizzle.

“It’s hardest when it’s raining,” he explained about his two years of living outdoors.

A short walk down the street, beneath the next overpass, finds Kazuo Oka, who makes about 3,000 yen (US$28) a day collecting recyclable cans, and is proud of the sidewalk dinners he makes on a portable stove. Continue reading … 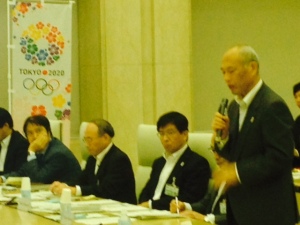 Tokyo Governor Yōichi Masuzoe today at the first meeting of the Council to Think of Tokyo’s International PR.

The Tokyo Metropolitan Government today got down to the business of planning to host the 2020 summer Olympics, convening the first meeting of the Council to Think of Tokyo’s International PR.

An impressive collection 15 people from various fields (national government, media strategists, think tanks, and journalists) met with Tokyo Governor Yōichi Masuzoe for a frank discussion of what it will take to successfully host the games.

Better wireless: despite Tokyo’s reputation as a tech geek center, its wifi services are far behind other international cities. END_OF_DOCUMENT_TOKEN_TO_BE_REPLACED